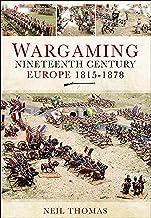 The nineteenth century was a very interesting time in world history as the nature of warfare was changing dramatically. We progressed from line formations using black power to troops taking cover and firing cartridge rifles. We went from front loading artillery firing round shot or canister with a short range, to a breech loading rifled artillery gun that had incredible range with explosive shells. During the wars of this period we saw an inkling of what warfare would become at the beginning of the 20th century with trenches scaring the European landscape. Finally, while most wars were small affairs, you began to find nations with standing armies ready to further the political aims of their leaders. Neil Thomas’ book, Wargaming Nineteenth Century Europe 1815 – 1878, illustrates a method where wargamers can begin to look at warfare that occurred during this period.

In my opinion, the book is divided into 3 main sections which are;

Each of these main sections is further divided into Chapters with the largest number of Chapters being devoted to wargaming Scenarios. From here we will take a look at the Chapters that are in each Section to show how each Chapter builds upon the preceding chapters to provide the reader with an excellent look at 19th century warfare. The first few chapters are;

The “Introduction” while only two pages in length set the tone of the entire book. Here the author informs his readers that this was the period that shaped modern Europe, saw the birth of the industrial revolution which led to a military revolution and introduced railroads to modern warfare which changed the way armies were deployed and supplied.

Chapter one provides the reader with some background after Napoleons failed revolutions. Neil Thomas begins this chapter by describing Key Events that occurred in history between 1815 to 1878. Next, he puts into perspective some of the more important events of this time by providing the historical insight into which they occurred. These 22 pages really provides’ the reader with an excellent, but brief look at the events that were most influential and directing the history of the period.

“Wargaming is a difficult hobby to master. It requires a sound grasp of the respective capabilities of infantry, cavalry and artillery units, combined with an ability to exploit terrain features such as hills, woods, towns and roads.” These are the words that Mr. Thomas uses to begin Chapter 2. While the Chapter title is Nineteenth-Century Wargaming, I think that a better name would have been “Designers Notes to Nineteenth-Century Wargaming”. In this chapter he gives the gamer/reader insight into why he designed the rules the way he did and his philosophy behind his decisions. This provides the reader with some excellent background information before getting into the rules section itself.

Chapter 3 is the Nineteenth-Century Wargames Rules. The first few items he writes about here are Units and Formations and the recommended Basing for the miniatures used in the game. He provides the gamer with base recommendations for figure sizes from 2mm to 42mm.

As you will have read in the preceding chapter, Mr. Thomas’s design philosophy is one of simplicity. While his desire is to wargame, he feels that you do not require an overly complex set of rules to accomplish the outcome. He wants his games to be fun and enjoyable while at the same time have the ability to provide the gamer with the ability to recreate an historical event.

Chapter 4 is devoted to Wargame Scenarios. In this chapter the author goes into quite a bit of detail explaining how readers can design scenarios and how to set victory objectives. One of his design criteria was that the wargame should be able to be played on a dining room table. As such, he suggests two different table sizes for the scenarios. The table sizes for most of his scenarios is approximately 4’ x 3’ and he does provide a smaller scenario that can be played on a 2’ x 2’ area. The scenarios that he provides his readers are;

In each of the scenarios you are told to roll dice to pick your troops, determine which side the defender will defend, and any pre-game events that could occur. Each of the scenarios comes with its own Victory Objectives which can vary from game to game. With this method of scenario creation there is no doubt that players will enjoy an endless scheme of tactical problems to solve.

For each of the armies, the author presents the Types of Units that composed the army, any special rules that should be applied when using this army, and some Commentary about the army including any Optional Rules that could be used. Reading through this chapter you can see that a great amount of research, thought and care was given when selecting an army or conflict to present to his readers.

Chapter 6 is a short chapter titled Wargaming Historical Battles. In this chapter the author talks about how wargamers would enjoy wargaming large historical battles with over 100,000 soldiers on each side and that these types of engagements can only be simulated with the help of a club or group of friends. The reason for that is because of the sheer number of miniatures that would need to be painted to portray that number of soldiers. However, those that have been fortunate enough to be involved with this type of event, have a special memory that they will enjoy for the remainder of one’s life. The remainder of the chapter delves into these types of battles and what wargamers need to do to successfully fight them.

The final 10 Chapters of this book are devoted to specific historical battles. Each battle is presented in its own chapter. First the reader is presented with a Historical Account of what occurred, followed by the duration of the game, a map of the battlefield, the defining of the troop types that were present, Special and Optional Rules that could apply to this battle and finally, the Victory Conditions of the Battle. The Historical Battles presented are;

As you can see, the author provides the wargamer an eclectic mix of battles that they can either fight, or just enjoy reading about in the book.

Following this there are three Appendices which are the;

This Bibliography is excellent as Mr. Thomas gives you a large number of Wargames, Military History, General History, and Military Uniform Books that readers can use for additional knowledge or research. Regretfully, he only provides a single reference book for figure painting while there are quite a few more.

In the Figure Sizes, Scales and Prices Appendix he begins with 54mm (1/32nd scale) all the way down to 2mm, and talks about the type of figures (metal or plastic), some scale crossovers, hints at the size of table you will require to fight your battle, and the approximate cost it would take you to put together an army in that scale.

In the final Appendices you are given what Mr. Thomas feels (and I agree) are some useful addresses. He provides a mix of magazine and book publishers or suppliers, Model Figure manufacturers, and Wargame Terrain manufacturers. What I especially enjoy, is that you are not only give the addresses, but also the companies telephone number and their website. This allows the reader to investigate the different companies and to choose the best one that meets their needs.

Wargaming Nineteenth Century Europe 1815 – 1878 is an excellent book with a nice mix of wargaming and history. While many gamers will feel that his rules are too simple, I found them refreshing in a time when rule books are hundreds of pages in length. His rules, while simple, get the job done. I especially like that his design premise was to provide wargamers a game that can be played on the dining room table in one evening. I believe that he succeeded in all accounts in that he has a set of rules that is simple, fast and fun where the wargamers must use sound tactics and make smart use of terrain to be victorious.

In closing, Mr. Thomas’s book is an excellent purchase and an enjoyable read. His chapter on Nineteenth Century Wargaming, or what I call his designers notes, is about two and a half times longer than the rules chapter. However, it is this well written chapter that provides the reader with an excellent insight into the background of a games design philosophy. With an excellent mix of gaming and history, Nineteenth Century Wargaming is a book that should be included in every Wargamers library.

This book is Available from Casemate Publications