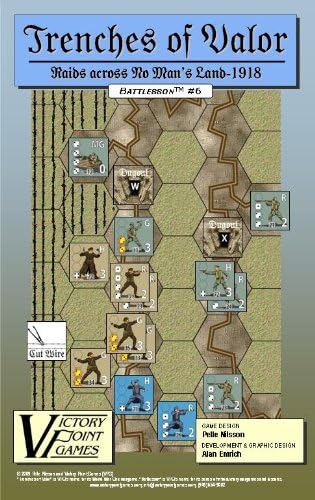 Trench warfare is a type of warfare where soldiers are relatively immune to small arms fire (pistols, rifles, etc.) and artillery doesn’t have any great impact. Trench warfare typically occurs when the two sides reach a type of stalemate and neither combatant can maneuver to gain an advantage over its opponent.

Typically, each side creates complicated trench systems in which they can defend their territory. With each side creating such trench systems, it is difficult for one side or the other to gain an advantage. The area that is between the two trench systems is typically known as “no man’s land” as neither side had an advantage over the other in this area. Attacks made across this “no man’s land” typically incurred high casualties as there was little shelter from artillery, machine gun, or rifle fire when the troops moved forward. This was the state of warfare that existed in the west for a greater part of World War I.

Trenches of Valor is a game that gives players a look at this type of warfare. Scenarios are provided in which both sides conduct assaults on the other. One side is the attacking player (Raiding Party) while the other is defending. The defending players’ job is to protect their trench lines and dugouts by repulsing the enemy. 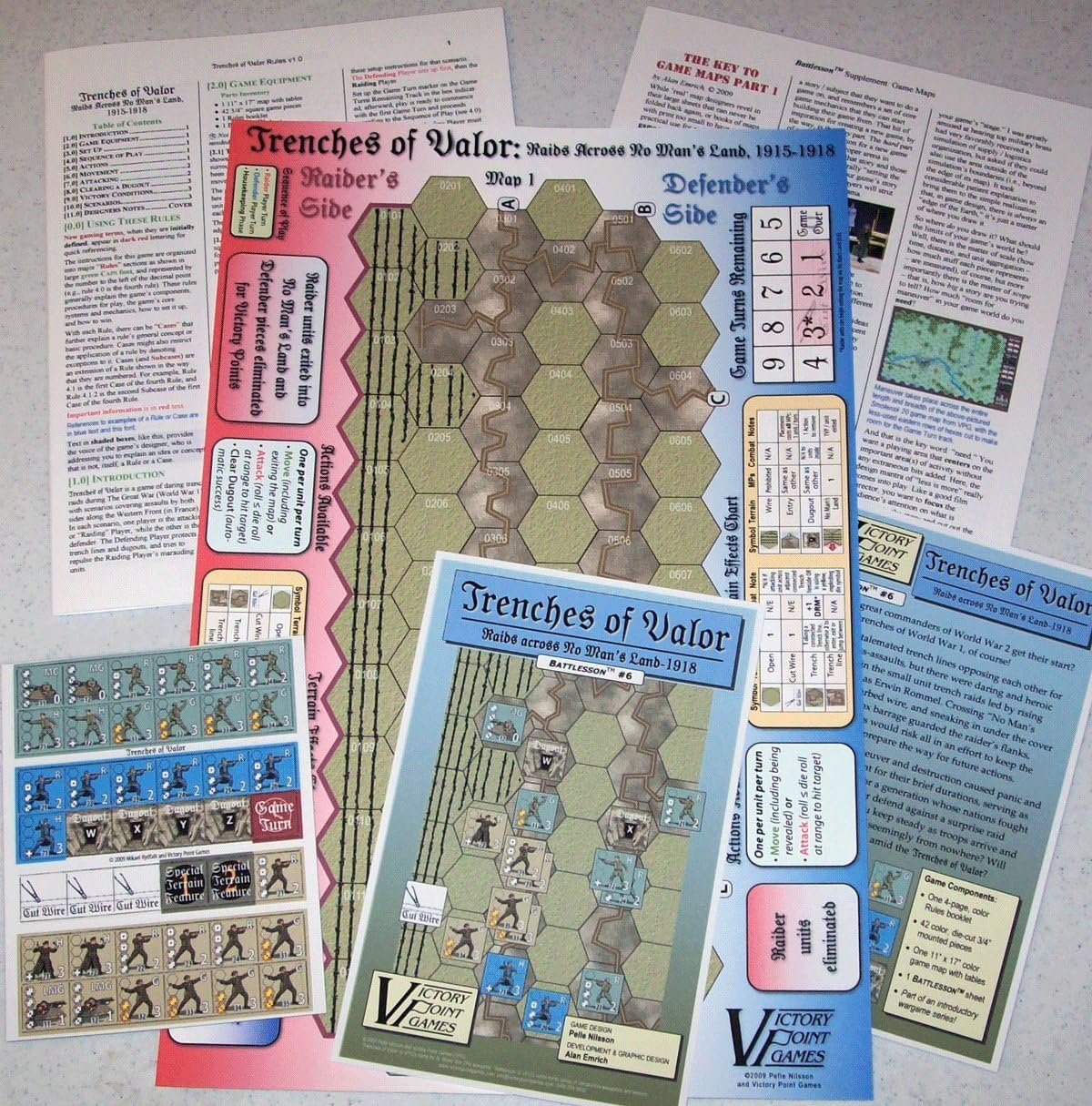 First, let me say that Trenches of Valor is not a complicated game. Rather, it is a simple game that can serve as an excellent introduction to the world of Wargaming. It can also teach a bit about the history of the time without players even knowing it. It’s a fun game that players will play over and over and even purchase the expansion which adds a new dimension to the standard game (but more on that later).

Trenches of Valor is a Tactical/Squad Level game depending on the scenario being played. The game map illustrates a typical World War I trench line and the surrounding area. There is a hex superimposed on this map and each hex is approximately 50 meters from side to side. Each playing unit (counter) represents anywhere from 2 to 10 soldiers and each turn is 30 to 60 seconds of real time. There are two sides of the map and the attacking player sits along the red side and the defending player sits on the blue side of the map. The counters that come with the game represent German, British, Canadian, or French units.

The Scenarios and the Game

The rule book for Trenches of Valor is only 4 pages in length with the last page and a third devoted to the six scenarios that are included with the base game. First, we’ll take a look at the Scenarios. The six Scenarios in the base game are;

The six Scenarios in the Expansion are;

All of the Scenarios follow the same format. The first item you are told is what map you need to use. With the expansion, you are given a new map on which you can play. Next you are told what attacking and defending units that you will use. After this, you receive special instructions, number of game turns for the scenario, scoring and Victory Conditions. The final two items detail any Special Rules that you may use and some detailed notes on the Scenario being played. The final item puts the Scenario in a historical perspective that gamers can really enjoy.

Now we’ll take a quick look at the rules for the game. As I said in the beginning, the game is simple to learn. The Sequence of Play is;

Each turn, a player can perform one action. The action can either be movement or combat. Combat is considered either attacking or clearing a dugout. Combat is completely voluntary and even if units are adjacent to one another there is no mandatory attack.

As you can see, all the information you need for movement and combat is printed right on the counter. The movement factor is on the right and on the left you see dice with different faces showing. The number of pips showing on the die is the “to hit” number needed to roll at that range. So, if there are 2 die showing on the counter and it is showing a 2 and a 3, what this is telling you is that are a range of 2 you must roll 2 or less to score a hit whereas if you are adjacent to the enemy unit (range = 1) rolling a 3 or less will score a hit. This may be a simple combat system but it is very effective and a lot of fun. 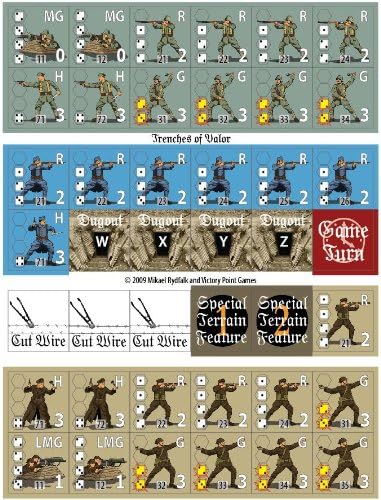 Finally, I just want to mention that the Expansion Module also includes directions for adding the new units into the first 6 scenarios. In this manner, the scenarios that come with the standard game take on a new life and different strategies will be employed especially with your leaders.

Trenches of Valor and the Expansion Module are fantastic introductory games. They setup quickly and play just as fast. These games keep the interest of the new gamers by introducing strategy without over complexity. Most importantly, the game is fun. A game for newbies that is simple and can be played in less than 25 minutes. Because of its fast play, even new gamers will setup and play more than one game in a sitting. While they say the game has a 2.5 complexity out of 9 I would rate it at 1 to 1.5 out of 9. However, under sheer enjoyment, I would definitely rate it a 10.