Sekigahara
The Unification of Japan 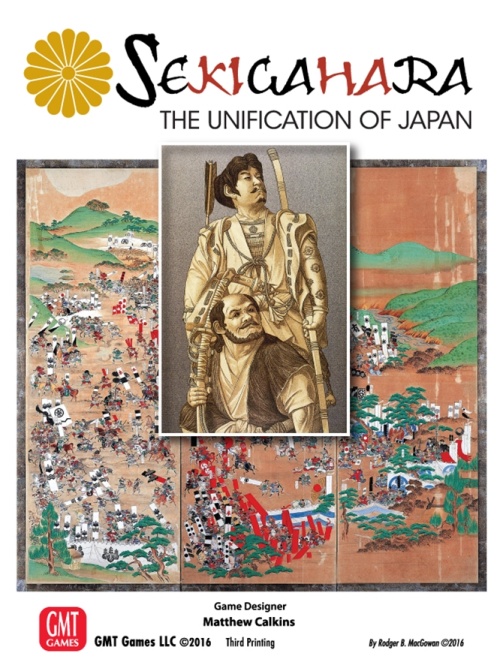 Sekigahara is a 2 player block game that depicts the Japanese campaign in 1600 that founded the Tokugawa Shogunate. Each historical leader assembled a coalition of daimyo’s and fought a 7 week contest that would decide who would control Japan. In the game, one player will assume the role of Tokugawa Ieyasu who was the most powerful daimyo in Japan, while the other will be Ishida Mitsunari who was the champion of the warlord’s child heir. The war was decided at the crossroads of Sekigahara where disloyalty and defections turned the tide of battle from Ishida to Tokugawa. How will you fair? Can you repeat history or will Ishida and the child heir rule Japan!

The physical components of Sekigahara are quite impressive. The game contains the following items;

Each block in the game represents approximately 5000 warriors or the block can represent a single daimyo (leader) with its noboi (banner) shown. The historical name of the leader is located on the cards with its associated symbol that will be used in the game. The strength of the block can vary from between 1 and 4 and some blocks have an attached gun or cavalry ability which is indicated by the symbol of a gun or cavalry symbol. Finally, each turn of the game equals a single week.

The Sequence of Play is very simple to follow and remember, while it is the tactics of the game that presents the challenge. The game is played in 7 weeks which each turn having the following Sequence of Play;

Now let’s take a look at each of the steps that occur in the Sequence of Play.

The first thing that each player does during this step is to discard half of their hand (rounded down). Now each player will draw 5 new cards from the deck with the player who controls the most castles drawing a 6th card. Next, each player draws at random from their bag a number of blocks as written on the Recruitment Track on the board. The player with more Resource Locations gets to select an additional block. Finally, players place their blocks in the player’s Reinforcement Box on the map board.

During this phase each player bids to decide who has the turns initiative by playing a card from their hand. Each player places the card from their hand down on the table face down. These cards are turned over simultaneously and the card with the higher number in the bottom corner is the winner. The winning player can choose who will go first during the following phases.

Each weekly cycle consists of two turns which are Turn “A” and “B”. Each “A” turn consists of a Movement Phase followed by a Combat Phase. This is then followed by a repeated turn which is Turn “B”. So in effect each player has two movement and two combat phases during each weekly cycle. The final item performed is advancing the Turn Marker to the next weekly space and if it is already on Turn 7 then the game ends.

Just like a standard game, each player can move some, all, or none of their stacks each movement phase. A stack is all of the blocks located in a single location. The number of stacks that can be moved depends on the number of cards spent for movement. At the beginning of the Movement phase, the active player discards either none, one or two cards from his hand. The number of cards discarded, will determine movement for the phase.

The active player can discard zero, one, or two cards which will have the following effect on movement.

Mustering is the action of bringing new units into the game at Recruitment locations.

The basic movement is one location per move. Stack movement can be modified if there is a highway, a leader or if the unit is force marching. Each one of these adds a +1 to the basic movement and are cumulative.

Like Movement, Combat in Sekigahara is controlled through the tactical use of cards. Combat must be declared in every location in which opposing pieces appear together. Cards are used to deploy blocks and each card that is played face up on the map can deploy one block. However, the “mon” symbol on the card and the block must match for the block to be deployed for combat. The “mon” is the symbol on the top of the card and across the block. Leader units do not require a card to be deployed.

When the active player plays a card, it is played face up and he then chooses a block to deploy for combat. Effectiveness in combat is measured in Impact and is kept track of on the Impact Track. The base Impact is the number of “mon” that is on the block, which can be between 1 and 4. Also, an Impact point is added for each block of the same daimyo that has already been deployed.

The final item that we keep track of during combat is which player has the initiative. The active player starts the battle by making the first deployment. Following this, play passes to the player who is losing the initiative which is the player with the lower Impact score. Play then alternates back and forth until both players have deployed all the blocks they can for that battle. Now it is time for combat resolution.

Sekigahara uses a diceless combat system. After a battle, sides take losses according to the Impact Points delivered against them. For every 7 Impact Points against an opponent, that player loses one block. After all Impact Points are totaled, the player that loses the battle also loses an extra block. Remember, blocks have to be maneuvered and be in the same area before a battle can commence.

Next, there are rules covering Special Attacks, which are attacks with cavalry or guns. There are also Loyalty Challenges, retreats, and Castle Sieges to name a few other rule enhancements that are covered.

Finally the last 8 pages of the rule book are devoted to the history of this critical time in Japanese history. Here you are provided with an overview that is well presented for this time period so that you can get a flavor of the men, weapons, and loyalties of those who fought in this important battle to unify Japan. The final words at the end of the History Section are as follows;

All author’s proceeds from this edition will be donated to recovery from the Japan earthquake and tsunami of March 2011.

Sekigahara is a block game that has a great amount of appeal. It covers an era that is often overlooked in our field of historical games. The rules are well written with an excellent balance of examples to text. The detailed “Combat Example” is remarkable as it fully explains the combat system from first block deployed through to the completion of combat. The examples presented clarify many points and accomplish this task through well illustrated diagrams with well written accompanying text. In all Sekigahara is a simple game to learn.

That is not to insinuate that it is a simple game to play. Reading through the rules and examining the components you can see that very seldom, if ever, will two games be the same. The strategy employed in one game, which may lead to success, will lead you to failure in another game. It’s the combination of the cards and blocks in play that keeps the game moving, challenging, and ever changing. Best of all, Sekigahara is a quick playing game so that typically in one evening a few games can be played. Finally, it is a pure strategy game that uses no dice. Players must maneuver their blocks across the map, strategically playing cards, and then tactically picking and choosing when and where to fight. The luck is in the skill of the player not the result of a die roll which we can all agree is a perfect way to play a strategy game.

Sekigahara is an excellent game that will challenge new comers and experienced gamers equally. Follow the rules, march your troops to the sound of guns and deploy them for battle. Can you repeat history or will Ishida and the child heir rule Japan! Only your strategy and witty playing of cards and blocks will define the outcome and determine the “Next Ruler of Japan”.