The Commandos and the Vaagso Raid 1941 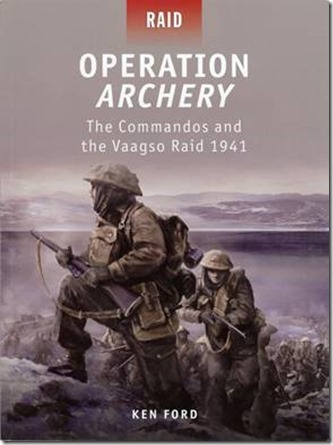 World War II, June 1940 Churchill had enough of trying to come to terms with Hitler and with that of other European countries appeasement mindset. He was determined to fight back and not let the Germans take Britain. However, it was becoming more difficult for Britain to deter Hitler’s growing control over Europe. Churchill was desperate for a plan that would greatly disrupt or at least slow down Hitler’s advance; and so the special permanent commando’ force was created. The Vaagso Raid of 1941 became the template for all wartime raids and the inspiration for larger combined forces operations in World War II and beyond.

The author explains why Vaagso, Norway was chosen and why Operation Archery was the first great raid of the Combined Operational forces between Britain and the RAF. The plans for this raid were well thought out as detailed in the Planning and Training section. The Raid itself was 33 pages of thorough description from the Approach to the Withdrawal and Evacuation.

The author did a fantastic job bringing this classic Commando raid to life. The illustrations, period photographs of battlescenes, etc., birds-eye views and maps throughout the book add dimension to the experience.