The Commands & Colors Samurai Battles game allows players to refight important engagements of Medieval Japanese history. The battles included in the scenario booklet focus on the historical deployment of forces and important terrain features in scale with the game system.

The Commands & Colors Samurai Battles game is based on the highly successful Commands & Colors game system and by design it is not overly complex. The Command cards drive movement and creates a type of “fog of war” and presents players with many interesting challenges and opportunities, while the battle dice are used to resolve combat quickly and efficiently.

The Honor & Fortune game mechanic tasks players to maintain a balance and in a roundabout way serves to measure an army’s discipline, honor and the fortunes of war. Using Honor & Fortune tokens to play Dragon cards will also add suspense and surprise that can bend the rules and instantly change the course of a battle.

The contents of this game are;

(Note: Some spare blocks are included.)

The Sequence of Play that is followed every turn for each player is; Follow the sequence shown below. Each phase must be completed before proceeding to the next phase.

Setting up the Game

You follow the sequence below when setting up a scenario to play the game.

1. Select a battle from the scenario booklet.

2. Each scenario specifies which army is at the top or bottom of the battlefield, and players should sit on the side closest to the army they will command.

3. Place the terrain tile hexes on the battlefield as indicated by the scenario’s battle map.

4. Place the unit blocks and Leaders onto the battlefield, matching the various units’ positions and Leaders to the scenario’s battle map. Each unit symbol represents an entire unit. Each warring army has its own distinctive block color.

8. Set the Victory Banner counters alongside of the battlefield.

9. Place the battle dice within reach of both players.

10. Review any special rules and victory conditions that apply for the scenario.

11. The starting player, as indicated in the scenario’s battle notes, begins play. At the beginning of a turn, the player must play 1 Command card from his hand. The Player places it face up and reads it aloud. There are 2 types of Command cards, section cards and tactic cards:

Section cards (left, center, right) are recognizable by an iconic representation of the sections of the battlefield on the lower half of the card. These cards are used to order a set number of units and/or Leaders in a section or combination of sections highlighted by an arrow(s) and a number on the card.

Tactic cards feature an explicit description of the number and type of units that can be ordered by the play of the card and may allow the ordered units to move and/or battle in ways not normally allowed in the basic rules.

After playing a Command card face up, the Phasing Player announces which eligible units or Leaders will receive orders.

Battles are checked and resolved in the sequence of the player’s choice 1 ordered unit at a time. A game ends the very moment that a player reaches his required number of Victory Banners. It doesn’t matter when this occurs during the game turn. This means that a game might even end on a successful battle back, with the Victory going to the active player’s opponent. A Player (Army Commander) had to bring some measure of order to the chaos that constantly hung over a fighting Samurai army. The fighting force that maintained some measure of control and discipline was likely to be the army that won the day. Honor & Fortune in a roundabout way serves to measure an army’s discipline, its honor and the fortunes of war.

As you can imagine, with a wide selection of 40 battles from which to choose, Samurai Battles is not a game that you will get easily bored.

Samurai Battles from GMT Games has a bit of a history. Samurai Battles was originally published as a game from Zvezda. Zvezda is primarily known for their high-quality models in all scales. As originally published, this game included 1/72nd scale plastic models of Samurai. However, a search on their website and you find that the game is no longer available and it is also difficult find on the net.

Finally. this is another game of ancient feudal Japan that I have taken a look at. An earlier review that I wrote was for the GMT Game that was the Unification of Japan, Sekigahara. You can read this review by clicking on the following link: https://mataka.org/sekigahara-the-unification-of-japan-from-gmt-games/. Samurai Battles from GMT Games is a simple game with complex tactics that is highly enjoyable. It is a game that is easily learned but difficult to master with all its subtleties. As with Sekigahara, Samurai Battles from GMT Games is another excellent game that I know will become a best seller.

Command and Colors Samurai Battles is available from GMT Games and retails for $82.00.

Command and Colors Napoleonic’s and Ancient’s 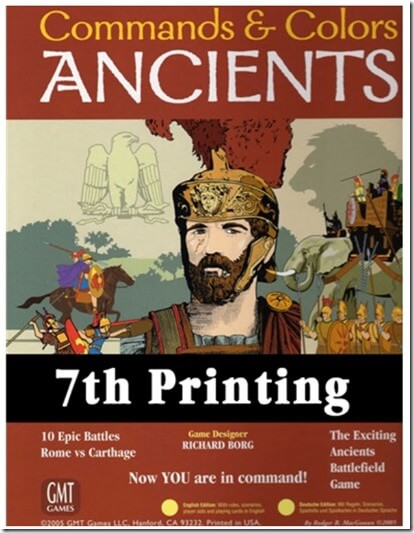 (Note: My original review of C&C Ancients core game has been lost. My website crashed and I lost a large number of reviews that I have not been able to recover.)

Tiny Battle Publishing Announces D-Day an and Beyond