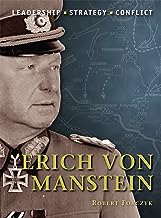 This 64 page Paperback book is number 2 in Osprey’s ‘Command’ series.

Erich von Manstein was one of Germany’s most important and controversial military figures of World War II. This 64 page book is about his military talents from his early years to his post war conviction and his later career. It was his ingenious operational plan that led to the rapid defeat of France in May 1940.

In 1943 during German’s retreat, Manstein commanded retaliation to the Soviet armies. However, as skillful as Manstein was he could not reverse Germany’s decline.

The Contents are: Introduction; The Early Years, 1887-1913; The Military Life, 1914-43; The Hour of Destiny; Opposing Commanders; When War Is Done; Inside The Mind; A Life In Words; Further Reading and Index.

The Introduction gives a brief background of the tradition of Bewgungskrieg (maneuver warfare) developed by the Prussian Army in the 17th century. Manstein demonstrated his operational genius in maneuver warfare with the ease of solving complex military problems with simple solutions. The Early Years, 1887-1913 provides a short personal history of his family, education and first post.

The next section is The Military Life, 1914-43 is 34 pages in length consisting of eleven subsections which are: World War I, 1914-18; Service in the Reichswehr, 1919-35; Wehrmacht service, 1935-39; World War II – Poland 1939; Sichelschnitt and the French campaign; Seelowe and Barbarossa; Drive on Leningrad; Conquest of the Crimea 1941-42; Return to the Leningrad front, August-November 1942; and The Stalingrad relief operation, December 1942. These sections provide personal information, describe the roles that Manstein’s played in the given situation, show his progression through the ranks and include insight in developing operational plans using maneuver warfare.

The Hour of Destiny subsections are: The front collapses, January-February 1943; Kharkov 1943: the backhand blow; Operation Zitadelle; Retreat to the Dnepr; The loss of Kiev; The Korsun Pocket; and Hube’s Pocket.

The author discusses how Manstein relied on the element of surprise, maneuver, offensive action, simple single envelopments and mass, plus he had an excellent grasp of time and space considerations.

Opposing Commanders – Manstein met his match in Nikolai Vatutin, fourteen years his junior but just as capable at maneuver warfare. In face, Vatutin proved that Manstein’s style of maneuver warfare did not work against a steady opponent. Where Manstein shunned politics, Vatutin joined the Communist Party and was held in high regard by Stalin and Zhukov.

When War Is Done is a brief description on Manstein after he was relieved of command; how he was approached to take part in the conspiracy to eliminate Hitler; and how he defended himself to a British military tribunal and was found guilty on two counts of war crimes receiving 18 years in prison (he was freed after 4 years due to ‘good behavior’).

Inside The Mind – Manstein’s operational concept laid the groundwork for the German armies greatest military victory. However, his biggest weaknesses were to properly employ the economy of force, and his poor assessment of enemy intentions and capabilities. The author discusses his relationship with Hitler, his interaction with his subordinates and his political views.

A Life In Words – speaks of Manstein’s memoirs, ‘Lost Victories’.

Manstein’s military reputation, most notably his role in Sichelschnitt, the capture of Sevastopol and the ‘backhand blow’. In

1944 Manstein was pictured on the cover of Time Magazine.

Like so many of Osprey’s books, this one is of special interest to World War II historians, students and enthusiasts alike.