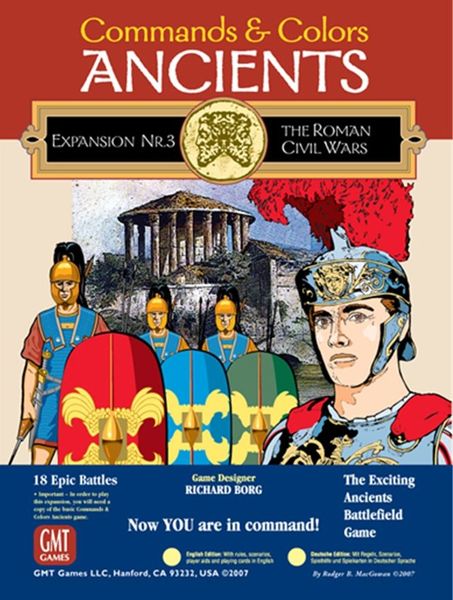 This expansion of the Command and Colors Ancients series cover the period from 82BC to 45BC, prior to the assassination of Julius Caesar in front of the Roman Senate. The Slave uprisings occurred during this period, but are addressed in Expansion No2. The 19 scenarios start with the Battle of the Colline Gate between the forces of Lucius Sulla, representing the “optimate” faction, and the forces of Gaius Marius, representing the “populares” faction. They continue through the period of the struggle for control of the “Roman Republic” to the final battle of Munda, in Spain, in 45BC, between the forces of Gnaeus Pompey, the eldest son of Pompey the Great and the forces of Julius Caesar. This was Caesar’s final battle before returning to Rome to declare himself “Dictator for Life” and engendering the animosity, which led to his death. This Expansion contains some 120 Infantry, Cavalry and War machine units to augment those found in the previous Core Game and Expansions. Leader units and Julius Caesar are found in Expansion No2 and the Map board, Command cards and Dice require the ownership of the core game. There is an additional Geomorphic Map board in this expansion, to which I will refer again later. The basic play sequence and Victory conditions remain the same from the Core Game. There are new Special Rules in this incarnation of the game, two of which were introduced in Expansion No2. The first of these is the “Marius Legions Rule”. When this rule is in effect Roman medium and heavy infantry units have a ranged attack as well as the normal shock attack. This is due to these units being equipped with the pilum. These units may attack either with a ranged attack or an assault in a turn, but not both. The second rule is the presence of Julius Caesar with a unit; this presence allows the unit to battle in Close Combat with the use of one additional die per battle-turn. The new rule included in this game is the Julian Legions Rule, which allows Medium and heavy infantry to move one hex and still engage in Close Combat, or two hexes and not fight. It also has the capability of ranged combat.

There is a complete description of the terrain overlays that can be used during these scenarios. The most notable feature is the use of the ramparts overlays for ramparts, and city walls. These overlays are used as normal in some scenarios and as scalable city walls or fortified city walls in others. The most notable addition to this expansion is the included geomorphic map board. Along with a similar board included in Expansion No2, you can create “Epic Ancients”.

This is explained in a booklet included in this game box. Epic Ancients begins with the unfolding of both map boards to create a map 29 hexes wide by 9 hexes deep. There are four scenarios included in the box for use with this expanded map board. They are Zama (202BC), Ilipa (206BC), Cannae (216BC), and Raphia (217BC). The Rules of play are pretty much the same as the individual games with the following exceptions. Since to gameboard is now twice the normal size it allows for the optimum of four players to a side. They consist of three Field Generals, one for each of the sections of the game (Right, Left and Center), and one Overall Commander for the side. The Overall Commander decides what his Field Commanders are to accomplish during this battle turn. The Overall Commander handles the Command Cards during the game, he is permitted to play up to three Field Command cards (one each) during a turn, or one Army Command Card, which effects all parts of the field. After the battles are resolved the Overall Commander picks two Command cards from the deck, except when this exceeds his printed total of Command Cards. Army Command Cards, which are universally applied across all sections of the Army have the restriction of the number of units moved or fired are limit to the total number of cards in the Overall Commander’s hand (including the card being played). The individual Field Commander, if not given a Command card to execute, has the option of using his Command Initiative. This procedure involves the rolling of a single die and either moving of firing a single unit, or possibly the elimination or retreat of a single unit dependent on the side of the die which comes up.

If you cannot round up eight players, play three to a side with the Overall Commander also controlling the Center section of the Army; two players, one controlling the two flanks and the other controlling the center and as Overall Commander. Lastly, you can play one-on-one as normal on the larger board. The designer suggests to give the use of the Command cards greater depth, to incorporate a second deck into the game. The Epic Ancients games require the ownership of all of the Command and Colors Ancients series.

To play the scenarios in the Roman Civil Wars, the Core game, and Expansion No2 are required. I cannot recommend this series too highly, the games are fun to play and as easy as the elimination of five or six units’ sounds, the tactical implications are sometimes very, very difficult to overcome. Each scenario gives you a capsule historical background, including the historical outcome, which is at times very hard to achieve. My recommendation is get involved and have a great deal of fun in doing so.

This boardgame/block game is available from GMT Games