It’s time once again for a quick update
on what’s happening.

What’s Old: ATO Magazine issue #57 with A Crowning Glory inside was mailed out last month.
Everyone should have their copy by now.
If you didn’t get your copy, and think you should have, write us at [email protected] and we’ll investigate
Being out means it’s also now available for sale as a single back issue and you can check it out here.
If you missed this issue due to your subscription lapsing (or having never subscribed at all), we have a special offer further below.
This will allow you score a copy of this issue at the subscriber’s discounted price!

Up Next: The improved and updated Beyond Waterloo Annual issue (we like to call it “Way Beyond Waterloo” here in-house) based on the original 2011 Annual will be our next release.
While most “Waterloo games” either lock players into the circumstances of that famous battle, or give some small leeway into the overall circumstances of the “100 Days” battles in Belgium, they all suffer from a similar narrow focus. You will have the Armée du Nord face some combination of Blücher and Wellington and everyone just does the best they can.
But any reading of the 100 Days shows a flurry of activity—key, historical events—which no one has bothered putting into game form.
Until now.

As per the original game, Beyond Waterloo, designed by John Prados, begins with Napoleon entering Paris and the Coalition Allies facing choices about what to do about this.
But we’ve expanded the base game with new options and scenarios, and improved the map and player area  to allow for new options. 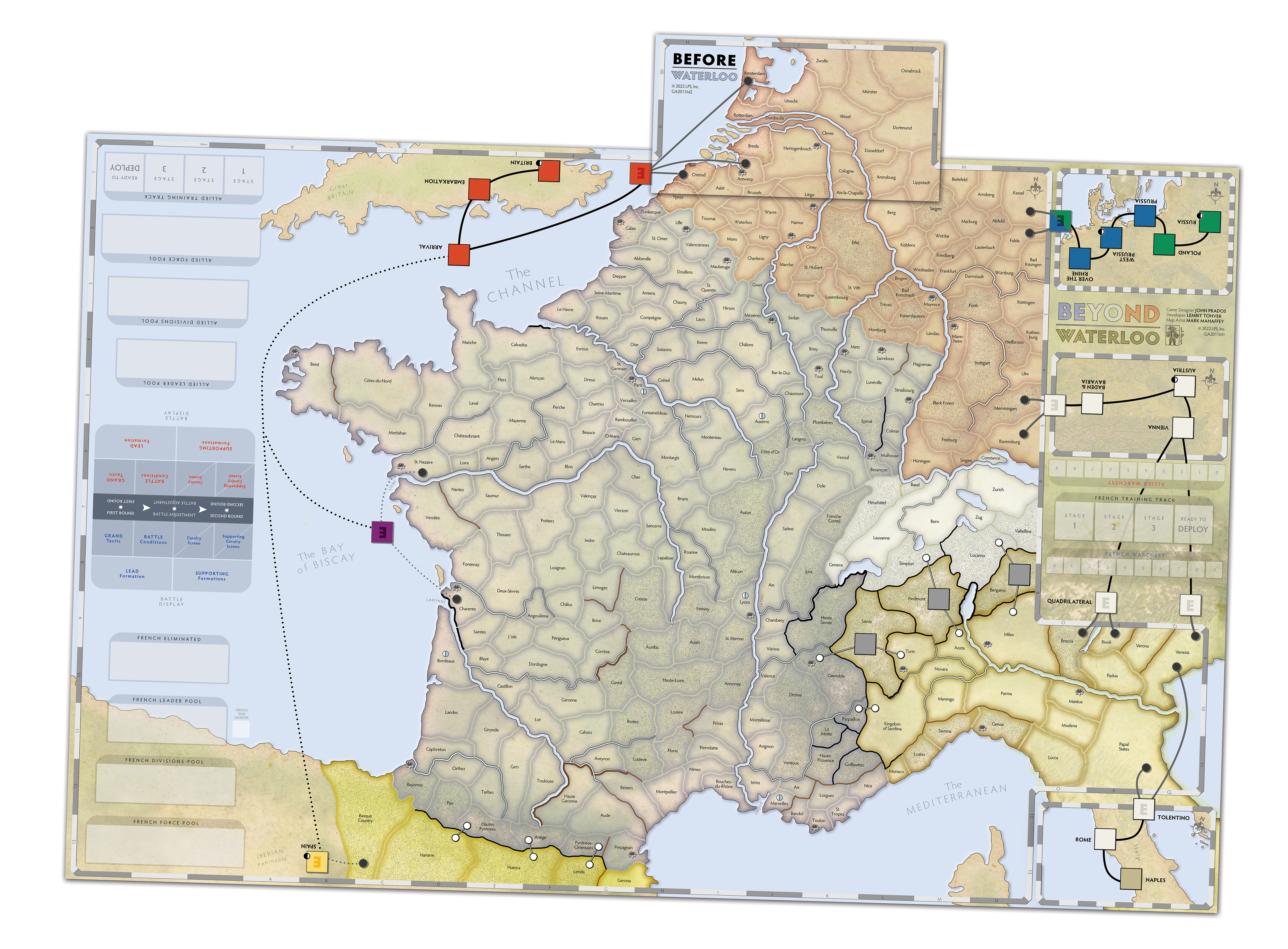 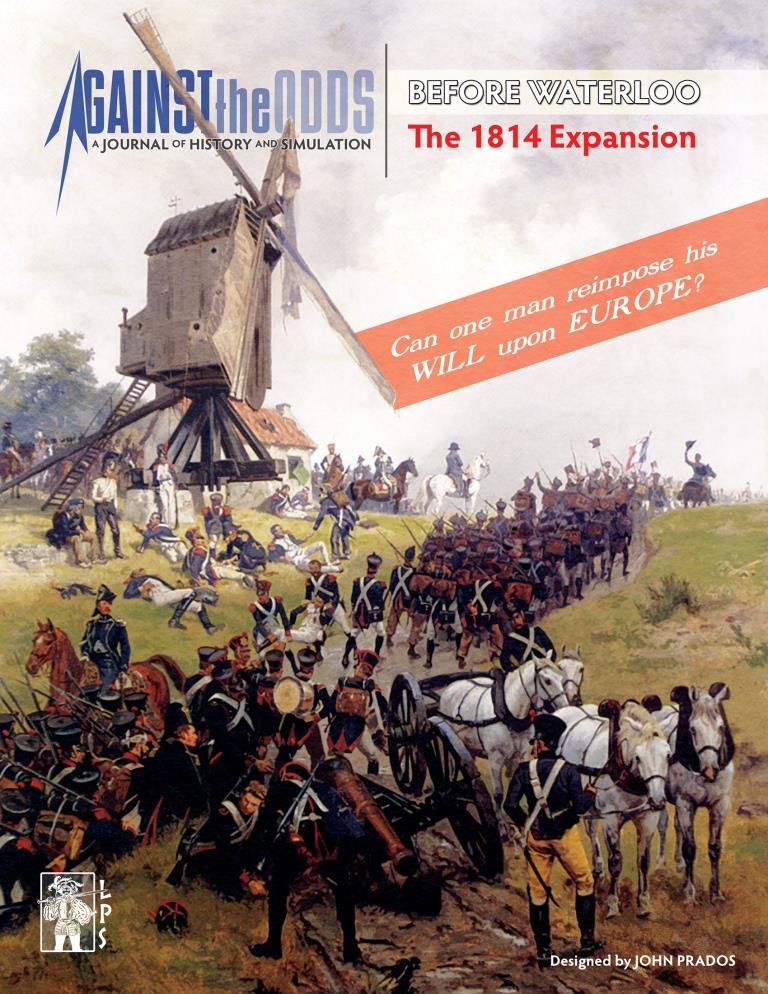 Plus, all the game components have been upgraded. Beautiful full color playing cards: 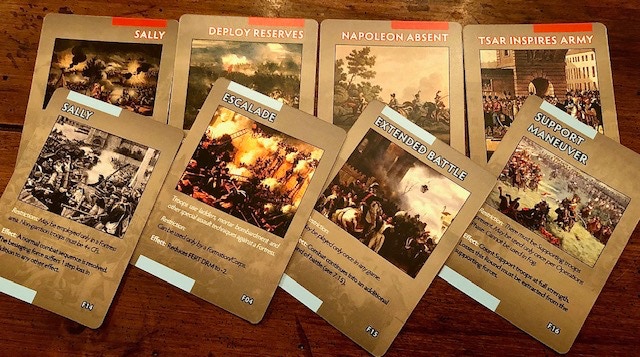 Separate cardstock cards holding all the game charts and tables: 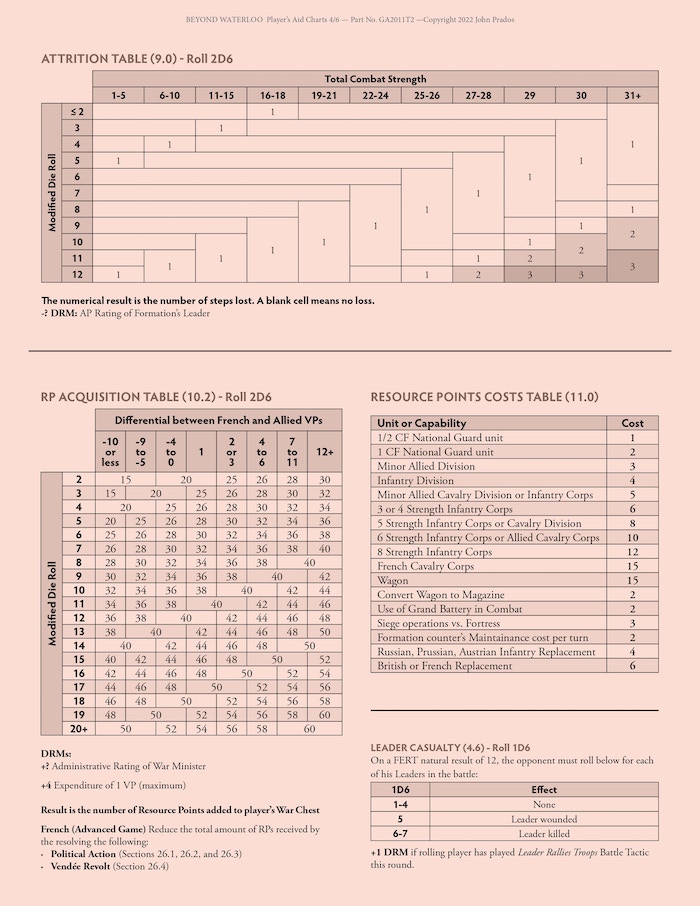 You can still pre-order this super Waterloo package at a preferred price up until we release it. Check out the details (and the neat video) on the game’s webpage here. Once you’re there, look to the lower right for a link to a PDF of the game rules and check out everything inside!
Then, After Waterloo: (couldn’t resist!) ATO issue #58 will feature Clash of Carriers by designer Mark Stille. The Battle of Midway was fought between seven carriers. Compare this to the Battle of the Philippine Sea which featured a total of 24 carriers on both sides! It was simply the largest carrier battle of all time which will never be surpassed.

Clash of Carriers, by designer Mark Stille, portrays this epic battle. The historical result saw the Japanese carrier force shattered, never to recover for the rest of the war. While this showdown is almost always treated as a one-sided affair, in this game players will have every opportunity to better the historical outcome or maybe even reverse history.

The Japanese player can use the superior range of his carrier- and land-based aircraft in coordinated waves to hit the US Navy while his fleet maneuvers out of US aircraft range. Historically, despite poor aircraft coordination, many Japanese aircraft broke through the US fighter screen to attack US carriers. What could better coordination accomplish?
The American player can opt for an offensive strategy with a number of task groups to try and inflict even more massive losses on the Japanese naval force instead of settling for defeating the Japanese air strikes. US submarines inflicted losses and tracked Japanese fleet movements — can they do so again, or will Japanese counter-measures foil historical results? 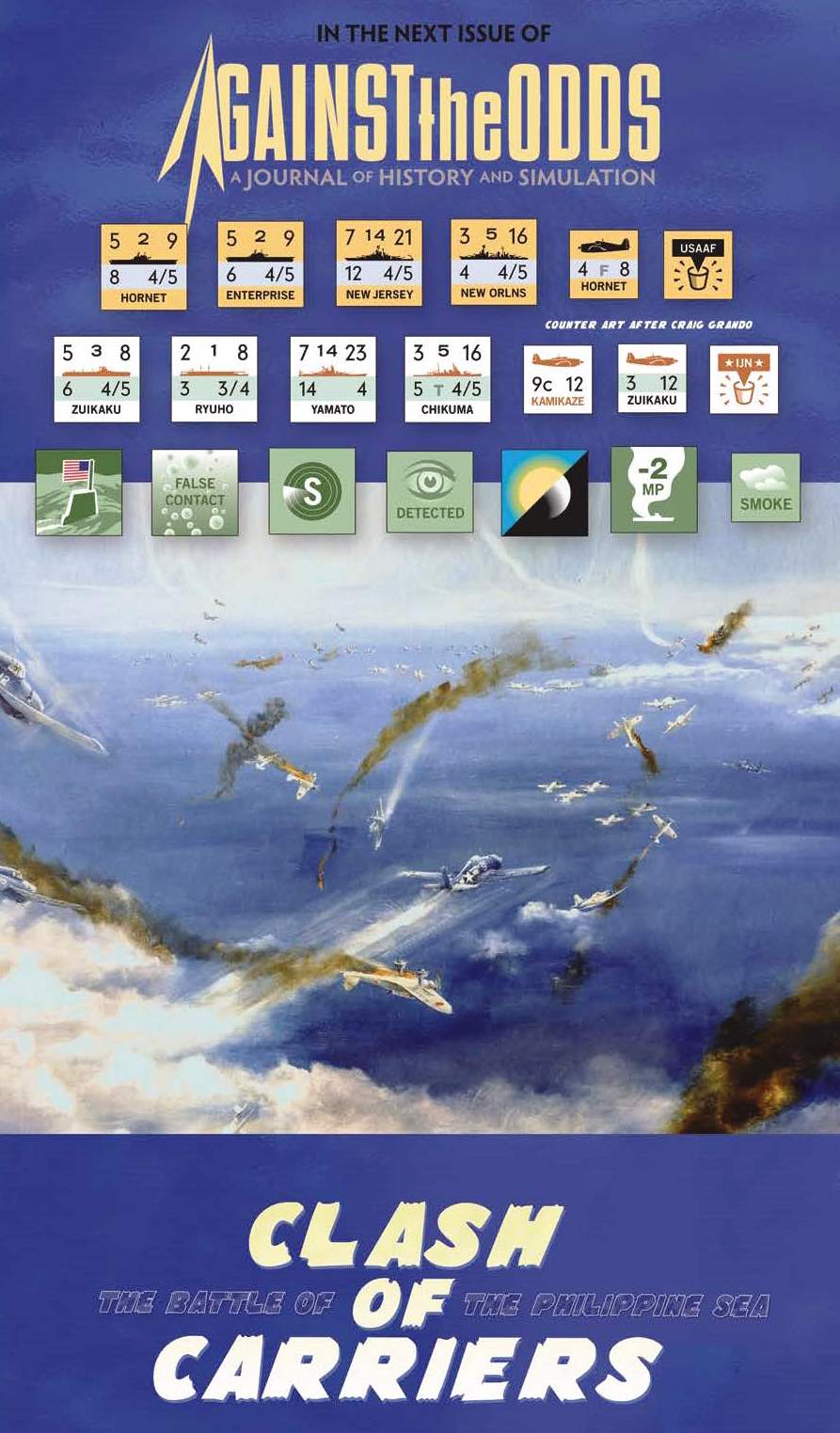 Clash of Carriers uses the same game system as Imperial Sunset (in ATO #17) which stresses playability over complexity. Random activation allows air and naval forces to maneuver and attack.
Task group, submarine, and dummy task group counters maneuver on the map, adding uncertainty to enemy force locations. Detection plays an important role in the game, but uses straightforward mechanics to enhance fog of war but not overwhelm other aspects of the game. Neither player will possess perfect knowledge of an enemy task group until the AA fires, bombs drop, and torpedoes launch.
Once found, air strikes and surface battles play out on tactical maps for speedy resolution. Anti-submarine warfare is equally smooth. Carriers, battleships, and cruisers are denoted by individual counters, while destroyers are represented in squadrons. Two to four counters are used to represent the various air groups on both sides.
The basic historical scenario offers the 1944 OBs, but what-if scenarios add optional surface and air forces and allow greater flexibility and coordination than performed in history.
All considered, the famous “Turkey Shoot” is not a given.

Sign up or renew your subscription now to be sure of receiving this issue when it mails early next year.

Now we have found that some folks sort of don’t notice that their subscription has ended until they get these newsgrams and realize they have missed several issues. We can help make that up with a special offer to let you fill in the holes in your collection. Our Pick 3 Special Offer lets you select any three back issues, even the three most recent ones published in ziplock format, for one low price–that even includes shipping!
International Readers: For our overseas friends, note that we no longer offer international subscriptions. However, if you choose exactly the last 3 published issues (the last 3 highest numbered ones – currently #55, #56, and #57) when you use the PICK 3 Special Offer above, we will assume you would have liked to subscribe to our magazine. So we will automatically include any subscriber bonuses (if any) from those 3 issues in your set. You can’t ask to skip an issue or choose a future one.

Oh, and last, about that special offer I mentioned up top. Order the new Beyond Waterloo and subscribe/resubscribe at the same time and we can start you with ATO #57 (A Crowning Glory) at the same time. We normally don’t allow “retro subscription starts” once the main mailing has passed but we can send ATO #57 along with your copy of the Beyond Waterloo and pass the postal savings on to you. Just write “Start me with #57 when you send Beyond Waterloo” in the comment field so we know you want this package.
OK, that’s it. Thanks for reading and of course, if you have any questions, write us at [email protected]