Confess I never imagined 20 years ago when our first issue was published that I’d be writing this today. But here we are, 20 years on, and ATO Magazine continues to be one of the most interesting magazines with a game in it out there. So I’m calling this April “the Coolest Month” and having a special promotion to celebrate. More on that below.

Pretty much everyone, with the possible exception of those in Australia, should have gotten their copy of ATO #55 with Lee’s Greatest Victory inside. If you didn’t (and Australian copies have been mailed), write us at [email protected] and we’ll investigate.

In ATO #56 we turn to the Eastern Front for a little known, but definitely an Against the Odds situation with Hitler’s Stalingrad – Breslau 1945. After being cut off and isolated in mid-February 1945, the German garrison at Breslau, some 50,000 men, defied all odds holding onto the city for almost a week AFTER Berlin fell! Hitler had ordered the city be held at all costs, believing Soviet forces tied up there were thus not taking part in any assault on Berlin.
The defending garrison finally surrendered just days before the war officially ended (with the Gauleiter in charge fleeing the city by air to escape capture). 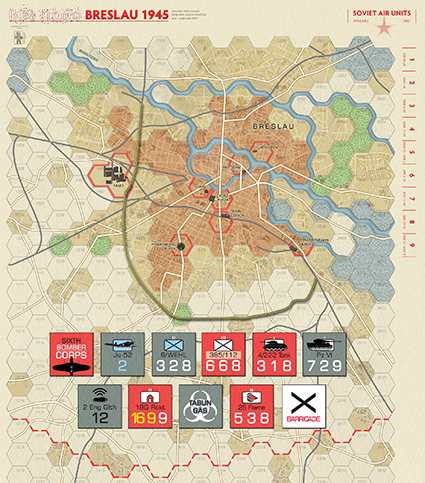 Taking the city fell to the Soviet Sixth Army, comprised of some eight divisions with 80,000 men between them, plus four tank regiments and two artillery divisions. An entire Air Army, the Second, was also assigned to provide ample destructive power from the sky. The task facing the Soviets was daunting; urban warfare plus a very determined defender. Terrain too was critical – the Oder River flowing through the city sliced it up into many parts. Taking a major sector of the city could mean nothing more than occupying an “island” in the end.

, looks hard at this defiant siege. With over 300 counters and a 22″ x 34″ map scaled at about 650 yards per hex, a game turn represents one week. The game captures the flavor of planned, grand assaults quickly degenerating into gritty, street-level fighting, with players alternating conducting operations during the turn. Skillfully positioned reserves and sharp counterattacks can blunt massive thrusts, but at possibly a too frightfully high rate of casualties.
Special rules model rubble and barricades; the multi-level city buildings; surprise and ambush during combat; Soviet command directives; the armored train “Porsel”; remotely controlled Goliaths; and the possible use of nerve gas (Breslau was the major repository of both Germany’s remaining stocks of the little AFVs and also the deadly nerve agent Tabun). Learn more about Hitler’s Stalingrad – Breslau 1945 by clicking this game link.

Then after looking at the Eastern Front, for ATO #57 we go back 140 years to a bit of hilly terrain in Bohemia that the Emperor of the French is planning to exploit to the fullest….

Even weeks before Trafalgar, by August 1805 the newly crowned Emperor Napoleon Ier, had come to understand his plans required action on land. More specifically, he had to defeat his continental enemies in order to secure his continued power. Britain, Russia and Austria (collectively known as the “Third Coalition”) were allied against him and, since he couldn’t get at the British on their island fortress, and Russia was too far away to allow for the required quick victory, he was left with invading Austria.
Rapidly surrounding and capturing the main Austrian Army at Ulm, December found Napoleon facing Austerlitz (modern day Skavkov u Brna) to the east in southern Moravia at the end of a very stretched supply line. He also appeared to be slightly outnumbered by a Coalition army made up of the remnants of Austrian forces, plus a sizable Russian contingent. 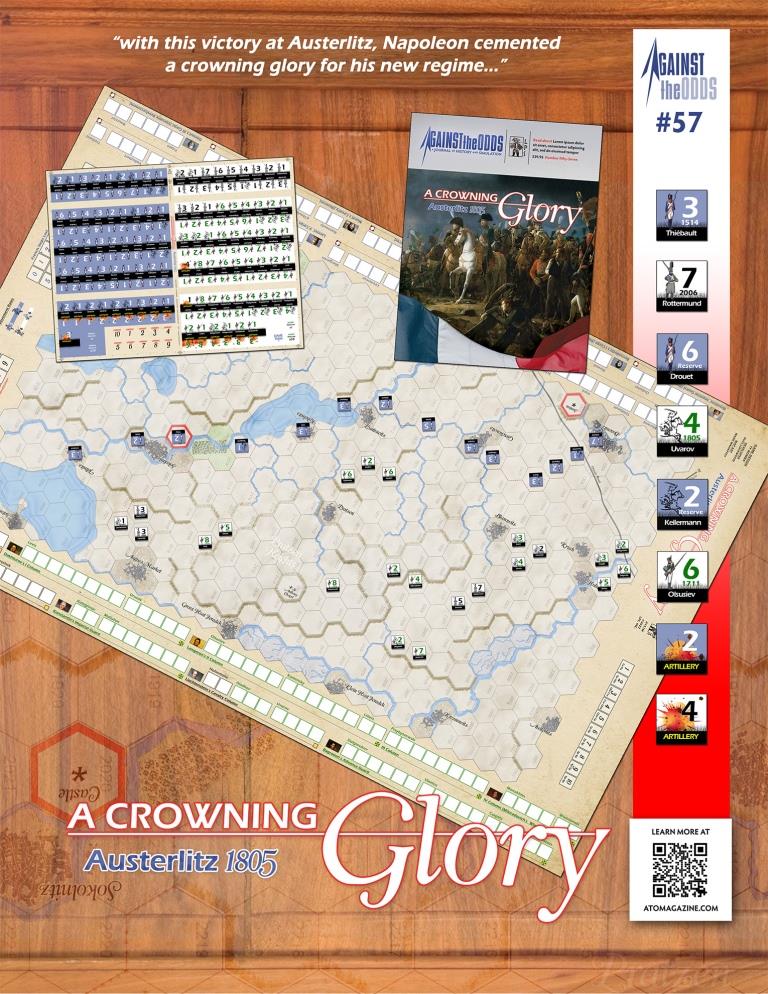 Feigning weakness, Napoleon lured the Coalition force into attacking his own right flank (where he wanted them to), then counterpunched through the Coalition center to encircle most of them. Austria and Russia were crushed, and with this victory, Napoleon cemented his hold on his own throne. It was…a crowning glory for his new regime.

This two-player grand-tactical simulation by Ty Bomba presents the battle generally considered to have been Napoleon’s greatest victory. Both players have the opportunity to attack and defend, but the main burden of the offensive resides with the French player. His opponent, the Allied player, commands the Austrian and Russian units. Each hexagon on the map represents 600 yards (~550 meters) from side to opposite side. The infantry and cavalry units represent both brigades and divisions on each side. Each full turn represents one hour of ‘real time.’ Learn more about A Crowning Glory by clicking this game link.

And the next couple of issues are looking very interesting indeed. Check them out here. Plus there are subscriber only goodies in the pipeline too, both free-standing mini-games and add-ons for the games already in your collection.

The good news is you can subscribe today and still get all the upcoming issues above!  Click here for options on subscribing or re-subscribing.

But what about any issues I’ve missed you say? We can help make that up with a special offer to let you fill in the holes in your collection. Our Pick 3 Special Offer lets you select any three back issues, even the three most recent ones (#53, #54 and #55) in ziplock format, for one low price–that even includes shipping!

Now About That Special Promotion:

ATO Magazine is opting to make this new month “April Cool” through all 30 days. Take advantage of our special 20th Year promotion to score yourself a free ziplock regular back issue on any order of $90.00 or more all this month (that includes subscriptions and re-subs too, and of course, turn any PICK 3 above into a PICK 4 with this special). As always, previous sales are excluded from this offer.

No promo codes to type in. Just list your free pick on the order form from any of the existing back issues for sale off our site.  Click here to see the list.

And if you’re not up for such a large commitment now, place any order of any size at our website and get out newest Pocket Battle Game below, Operation Kita, with die-cut counters included for free. That’s in addition to the regular free PBG and counters you can get with any order. 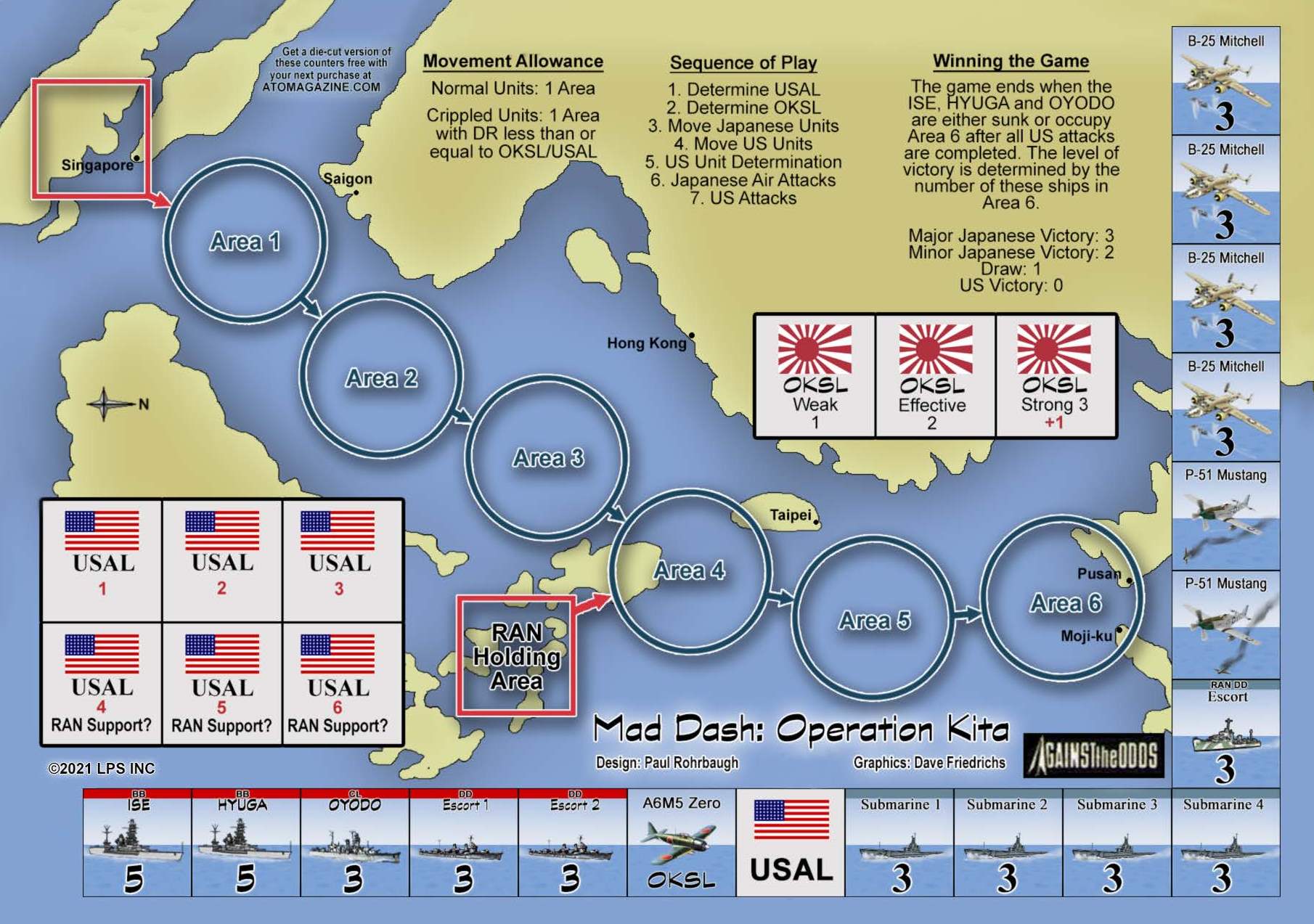 If you have any questions, or would like to tell us about your experiences as a subscriber, I would love to hear from you. Write us at [email protected]

Thanks for reading, and a great 20 years!