Greetings from ATO Magazine.
Just a quick update from Against the Odds this time. First off, we wanted to alert everyone to the window remaining to still vote for the Charles S Roberts Awards this year. So if you liked 6 Days of War, “Almost a Miracle!”, Operation Ichi-Go, any of the 4 nautical games in Sea Monsters!, the updated Buffalo Wings, or even just our little Goto Hell PBG, let the world know with your nomination. Of course, it goes without saying that if you’re reading this, you probably also enjoy our magazine and the writers and artists inside, so vote for those too.
Click on the banner below visit the CSR site and fill out a ballot.  Note that nomination period ends July 31st so do make plans to visit soon!

You can also read more about the CSW Awards here:

n other news there’s also a new black swan item available. Way back in the ATO 2008 Annual, Paul Rohrbaugh’s game on the 1943 Solomons battles, Operation Cartwheel, explored fresh ground. A game with integrated land, sea and air operations was very new at the time…but it worked. So much about the game does… except getting a copy. It has been out of print for years.
We recently found a stash of “extra” counter sheets, maps, and air displays for Operation Cartwheel. There’s no magazines left to go with them — darn! — but folks could still have the complete game by ATO putting the game rules and charts on a CD! (So we did)! Note that this version of the 2008 Annual only has the Cartwheel game in it. There’s no magazine, and no Gazala Line ’42 mini-game inside.

Also starting to mail late this week will be the new Annual featuring La Vendée. You can probably still make the cutoff for the mailing if you get you order in over the next 2 days. What’s it about? Well the Central Western provinces of France proved to be a major headache to the new French Republic.
Parisian decrees ordering conscription and church closures encouraged a counter revolution. Vendéan peasants first begged local nobles to rebel, and then defend them against a massive Republican invading army. Outnumbered 2 to 1 by these well-equipped troops, La Vendée was subdued and large swaths burned. Its inhabitants were slaughtered. Historians still squabble over the term – genocide.
This area movement game by designer John Poniske depicts the first Royalist rising in 1793. Explore both sides’ options (and horrors) with La Vendée.

After La Vendée, inside ATO #54 will be Monty’s D-Day the companion game to Bradley’s D-Day, completing the Normandy Invasion vision of John Prados by adding the D-Day assault beaches targeted by the British and Canadian forces. The objectives were ambitious with the city of Caen, 9 miles inland, targeted for capture on D-Day itself! It actually fell in late July, and only after having been leveled by bombing. Was it a “city too far?”. 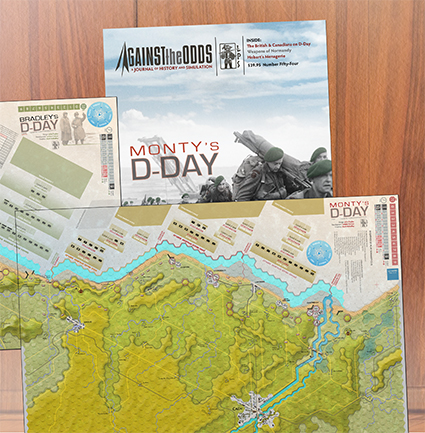 Best of all, Monty’s D-Day links to Bradley’s D-Day to permit players to investigate the possibilities of the full panoply of the D-Day invasion, but also works as a stand-alone game on the D-Day landings and including a campaign format.
Then we’re on to ATO #55 with Lee’s Greatest Victory inside. This is an area-impulse game but one unlike anything seen before. Since the appearance of the “sunset die roll” nearly three decades ago players have alternated activating a single area, with variation coming in the form of an uncertain turn length. Play has a chess-like feel, with players able to act and react with a great deal of prior calculation. Short turns could be frustrating for one or both players.
In this revolutionary development of the genre players no longer know how many impulses they, or their opponent, will have, creating both opportunities and crises that cannot be anticipated in advance—just like real combat. The “momentum” swings back and forth but rarely the same way twice. At the same time, each turn lasts as long as the players wish it to last, ensuring something will happen every turn.
Here’s a quick peek at some of the map and counters. 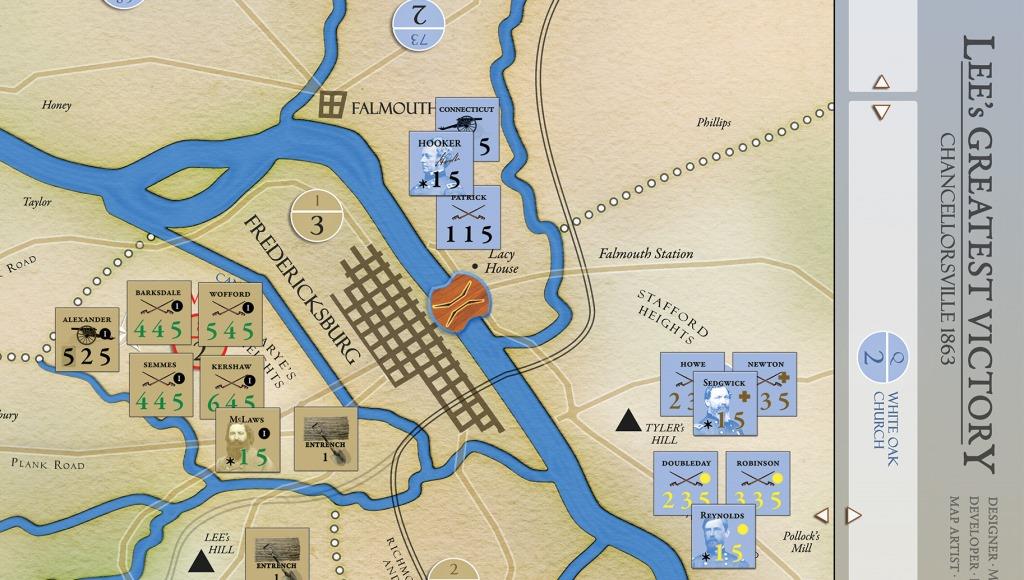 OK, thanks for reading! And don’t forget to vote for the Charles S Roberts Awards this year. Even if we’re not your first pick, then give another deserving designer/author/artist/firm your vote!
Thanks for reading,