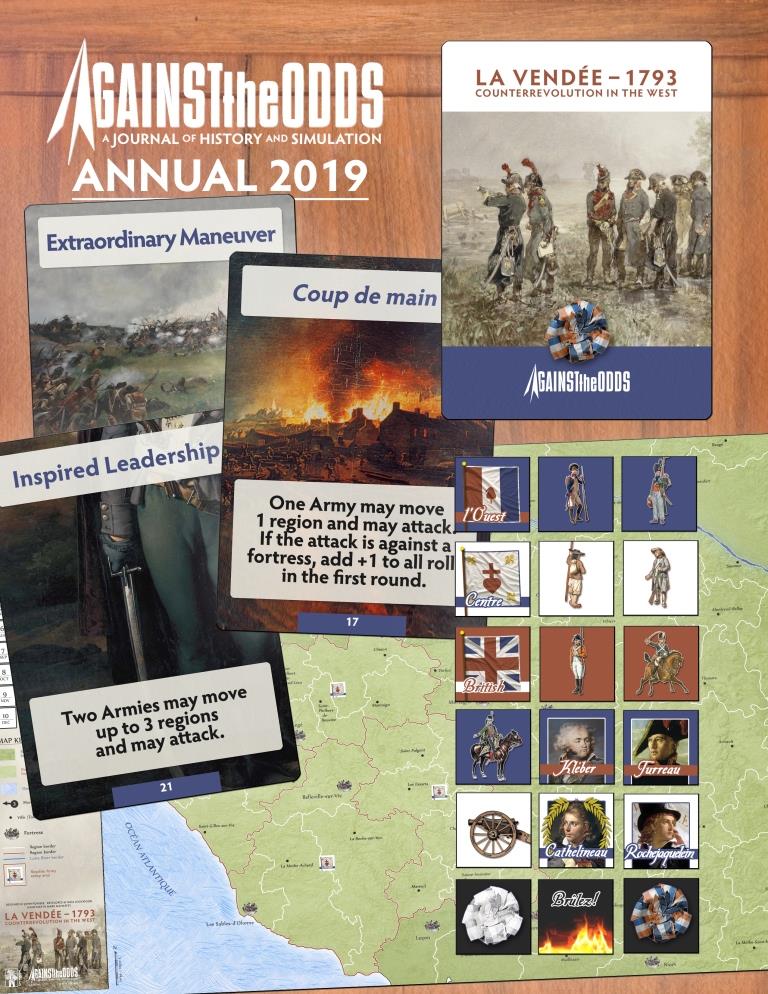 This first week in June finds us with a fresh promotion, and a final chance to participate in our Kickstarter to bring the 2011 Annual with Beyond Waterloo inside back into print. I’ll get to both of those further below in this newsgram right after the latest ATO magazine update.

Up next will be our Annual featuring La Vendée. In 1793 the Central Western provinces of France proved to be a major headache to the new French Republic.
There, nobles lived with and were respected by the peasants who adhered to Catholicism. Parisian decrees ordering conscription and church closure encouraged counterrevolution.
Vendéen peasants (Whites) begged local nobles to rebel and defend them against a massive invading army (Blues). The odds were against them but with remarkable martial spirit the Whites captured what they needed.
Victory seemed possible despite massacres committed by both sides. At one point the Duke of York considered landing British troops to support them.
Outnumbered two to one by well-equipped troops led by generals Lazare Hoche and Jean Baptiste Kléber, the Vendée was subdued and large swaths burned. Its inhabitants slaughtered.
Historians still squabble over the term – genocide.
Still, the Vendée (pronounced “VON-Day”) rose again – and again – and again, even during Napoleon’s reign.
Notably, the Whites so worried the Emperor during his “100 Days” that Napoleon actually committed 20,000 troops to settle the region.
Might those troops have staved off defeat at Waterloo?

This area movement game by designer John Poniske depicts the first Royalist rising, centering on the “White” player’s attempt to capture and hold Republican forts.
If all goes well the English may enter the fray. Meanwhile “Blue” armies attempt to overwhelm their weaker foe and implement a scorched earth policy while partisans harry their every move.
Event cards present both sides with opportunities and challenges.

Learn more about La Vendée by clicking this game link.

Wow—it’s been 80 years since “the world held its breath,” as the largest invasion operation in history began. Operation Barbarossa launched over 3 million men on the Axis side, crossing the border in a bid to crush the USSR in a single campaign. For the rest of World War II, the biggest battles and the most devastation would take place on the “Eastern Front.”
ATO captured Barbarossa in a new way, as our Four Roads to Moscow Annual in 2010 challenged four famous designers to create four games, each capturing their very different points of view on why the campaign failed. While we are sold out of that Annual issue, we do have some individual copies (“Black Swans”) of each of the four games making up the original set.
And you can pick one of them for FREE when you spend $80 during the month of June. Any purcahse counts towards this total, subscriptions, back issues, boxes, anything.
Choose one of these (each link will give you details about the game):

· Strike the Bear by Roger Nord
Not an East Front fan? OK, instead head for the South Pacific and choose a free copy of a game from another sold out Annual. Operation Cartwheel was featured in the ATO 2008 Annual and is now out of print too. This offer is for the game only. You’ll get the printed map and play aids, plus mounted die-cut counters, but with no magazine, and the full rules and game tables on a CD.
Purchase at least $80.00 worth of products anytime in June—that’s for gamers both in the US and International!—that’s all you need to do to qualify. (As always, previous sales are excluded). Then type in promo code BARB80 in the Promotion Code field at check out (remember to hit the Apply button), plus enter the name of the free game you want from the list above in the Comments field on the order form. (And you still get a free Pocket Battle Game too!) Pick from the list below.
Don’t hold your breath! Take advantage of this terrific offer, while supplies last!

For our Beyond Waterloo Kickstarter, we hit $20K in our effort earlier this morning. CONGRATULATIONS! But no celebrations yet…
We have just under a 4 days before the project ends and we want to load the deck for a big finish. Just click on the image above to enter our camapign on Kickstarter to read the full story (and pledge).
But for now, know that designer John Prados really, really wants to do the 1814 Campaign as part of this releae and we want to make him happy, so we are LOWERING the SG level to $24K.
AND we are adding a new SG at $26K that will make 1814 even better.
In the years since “Beyond Waterloo” was released, John has been thinking about the combat system and has been conjuring on something that would produce results with a little more drama, a little more decision making, and that use the cavalry/infantry combination more appropriately to the period.  It requires some rules tweaks and a different sequence and, especially, a new Battle Board. John Prados writes:
“While the overall combat system remains identical, the old BEYOND WATERLOO Major Battle Display will undergo some actual changes. The revised system now gives each side 18 cards versus a dozen. And it adds some “Battle Conditions” and resolves certain actions (Cavalry Raids) differently.”
Here is a peek at two of the new cards (French on the left, Allies on the right): 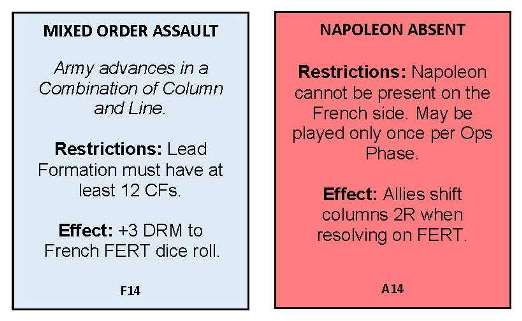 Note, these are cards in the original Beyond Waterloo style. If we reach the stretch goal, the additional cards will use the Deluxe style for all new cards.
Now, before we go further on the changes, we want to point out a big thing– at $20K, everyone will get the Deluxe Tactic Cards that currently exist. At $26K, that turns into EIGHTEEN cards instead of 12 cards each.
Continuing what else will change, here is the current Battle Board. 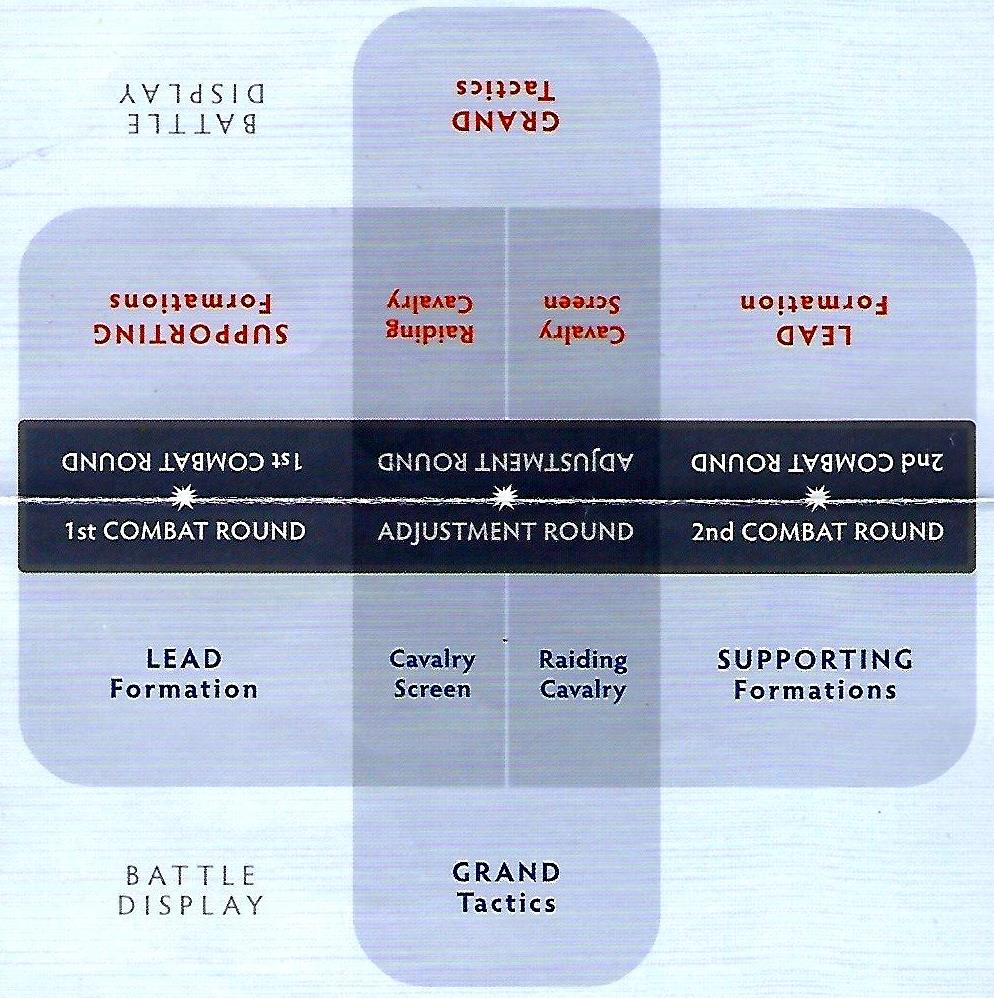 And here is an… how do they say it, an “Artists conception” (drawn in John’s own hand) of what the new Battle Board would include. 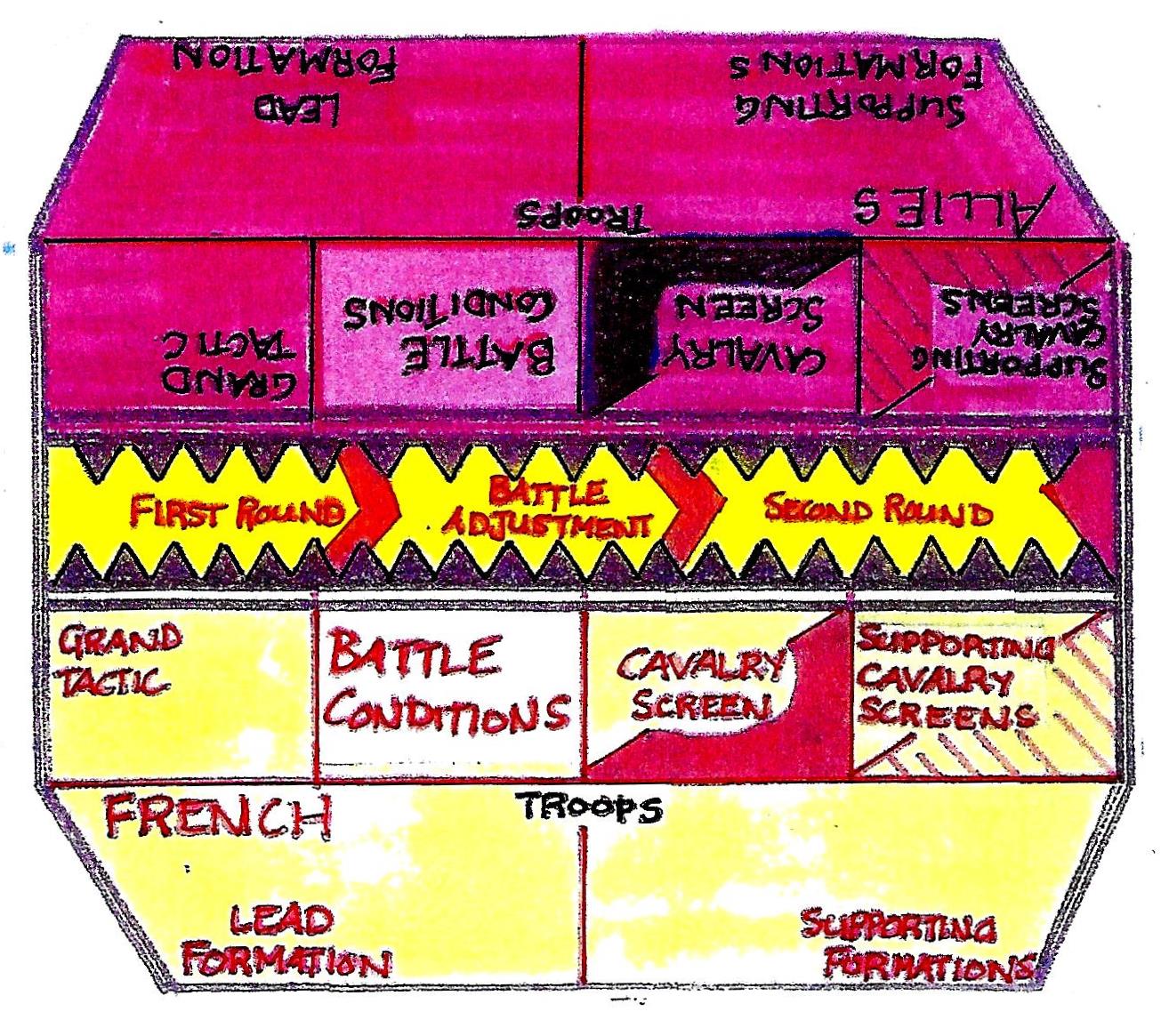 So that is the new Support Goal for $26K. A new (or Advanced, and, therefore, optional) Battle Board which primarily makes Napoleonic Cavalry act more like cavalry. Plus the rules to use it and cross-pollinate to the 1815 “scenarios.”  AND we add six more DELUXE Tactics cards to each hand.

We still have one more Stretch Goal in our pocket, depending on how quickly you-all can get us to the $24K level! But the Advanced Battle System is Big, BIG stuff!

OK, that’s the news for June. Thanks for reading!