This is one of our occasional newsgrams out to everyone with updates on what’s happening at ATO.

First up there’s an exciting new twin solo game proposal up for voting on our In the Pipeline page on our website called Cities of the Damned. Check it out and vote for it if intrigued. Use thes link to get there quickly. Remember, every registered user on our website has 3 votes they can cast for games that interest them. Help shape what ATO publishes to your liking!

Then next up from us and starting to mail in about 2 weeks is Lee’s Greatest Victory: Chancellorsville, 1863 appearing in ATO #55. This is an area-impulse game but one unlike anything seen before. Since the appearance of the “sunset die roll” nearly three decades ago players have alternated activating a single area, with variation coming in the form of an uncertain turn length. 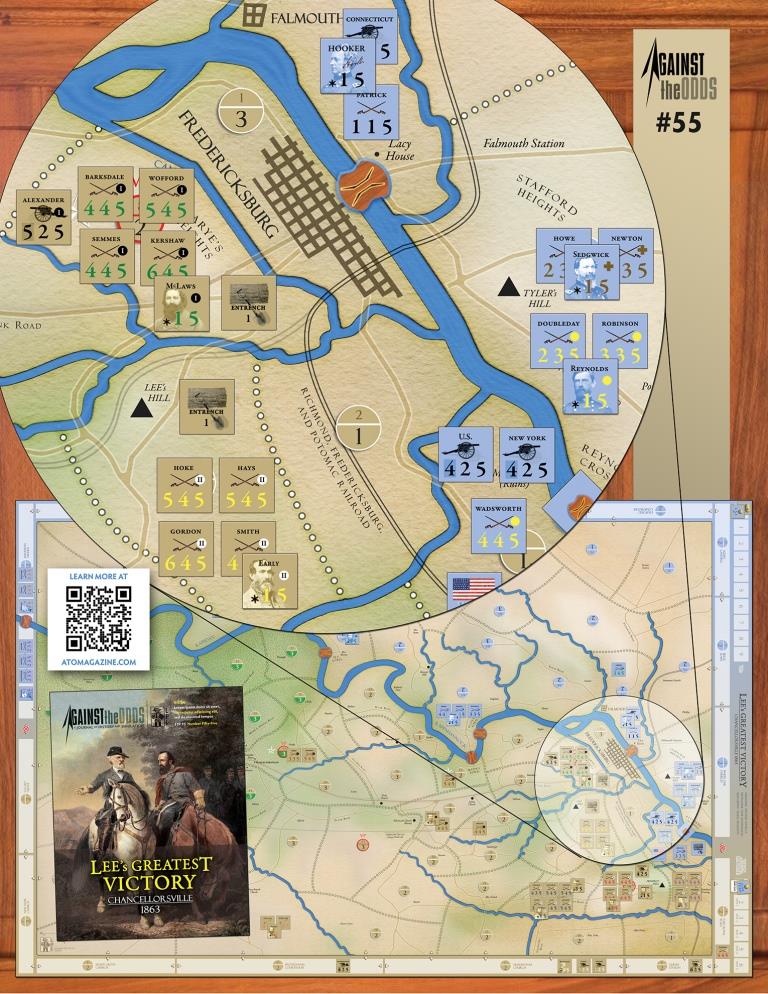 Play has a chess-like feel, with players able to act and react with a great deal of prior calculation. Short turns could be frustrating for one or both players. In this revolutionary development of the genre players no longer know how many impulses they, or their opponent, will have, creating both opportunities and crises that cannot be anticipated in advance—just like real combat. The “momentum” swings back and forth but rarely the same way twice. At the same time, each turn lasts as long as the players wish it to last, ensuring something will happen every turn.

The game features one 22″ x 34” area map, 176 double-sided 5/8” counters, and around twelve pages of rules. Units of maneuver are Union divisions and Confederate brigades for the most part, with historical leaders present to provide a combat boost though at the risk of being wounded or KIA. Pontoon bridges and entrenchments are part of the basic rules while optional rules incorporate weather and optional units for both sides. Best of all, it’s just six turns and playable in one sitting!

Then after looking at the American Civil War, we turn to the Eastern Front for a little known, but definitely Against the Odds situation with Hitler’s Stalingrad – Breslau 1945.

After being cut off and isolated in mid-February 1945, the German garrison at Breslau, some 50,000 men, defied all odds holding onto the city for almost a week AFTER Berlin fell! Hitler had ordered the city be held at all costs, believing Soviet forces tied up there were thus not taking part in any assault on Berlin. The defending garrison finally surrendered just days before the war officially ended (with the Gauleiter in charge fleeing the city by air to escape capture). 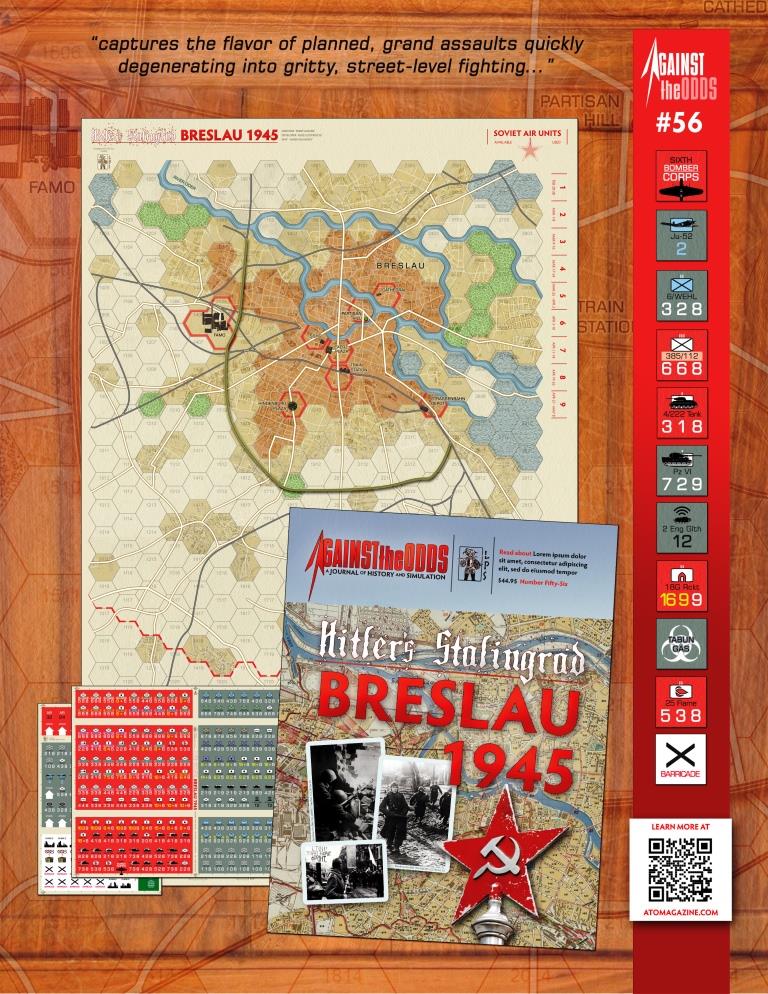 Taking the city fell to the Soviet Sixth Army, comprised of some eight divisions with 80,000 men between them, plus four tank regiments and two artillery divisions. An entire Air Army, the Second, was also assigned to provide ample destructive power from the sky. The task facing the Soviets was daunting; urban warfare plus a very determined defender. Terrain too was critical – the Oder River flowing through the city sliced it up into many parts. Taking a major sector of the city could mean nothing more than occupying an “island” in the end.

Hitler’s Stalingrad: Breslau 1945, looks hard at this defiant siege. With over 300 counters and a 22″ x 34″ map scaled at about 650 yards per hex, a game turn represents one week. The game captures the flavor of planned, grand assaults quickly degenerating into gritty, street-level fighting, with players alternating conducting operations during the turn. Skillfully positioned reserves and sharp counterattacks can blunt massive thrusts, but at possibly a too frightfully high rate of casualties.

Special rules model rubble and barricades; the multi-level city buildings; surprise and ambush during combat; Soviet command directives; the armored train “Porsel”; remotely controlled Goliaths; and the possible use of nerve gas (Breslau was the major repository of both Germany’s remaining stocks of the little AFVs and also the deadly nerve agent Tabun). Learn more about Hitler’s Stalingrad – Breslau 1945 by clicking this game link.

Of course, there are other subscriber only goodies in the pipeline too, both free-standing mini-games and add-ons for the games already in your collection. First one below is “Ever Onward” (the ship motto of the KM Scharnhorst) which is an expansion for Arctic Disaster (ATO #47). This kit by Paul Rohrbaugh looks at the other arctic naval battles in the North Cape and Barents Sea areas.

Also in the works is “The Empire Spanks Back” which is an expansion kit for The Lash of the Turk (ATO #30). This kit by Andy Nunez explores the revenge of The Holy League as they work to drive the Turks back into the Balkans after the 1683 Siege of Vienna.

Last is a variant for Red Dragon, Blue Dragon (ATO #45) called “Enter the Dragon” by Earl Dixon. The “China Lobby” successfully pressures President Truman to intervene in the ongoing Chinese Civil War (not to mention rescuing US hostages).

The good news is you can subscribe today and still get all the upcoming issues and kits above!  Click here for options on subscribing or re-subscribing.
But what about the issues I’ve missed you say? We have found that some folks sort of don’t notice that their subscription has ended until they realize they have missed several issues. We can help make that up with a special offer to let you fill in the holes in your collection. Our Pick 3 Special Offer lets you select any three back issues, even the three most recent ones published (#52, #53 and #54) in ziplock format, for one low price–that even includes shipping!

For our overseas friends, note that we no longer offer international subscriptions. However, if you choose exactly the last 3 published issues (the last 3 highest numbered ones) when you use the PICK 3 Special Offer above, we will assume you would have liked to subscribe to our magazine. So we will automatically include any subscriber bonuses (if any) from those 3 issues in your set. You can’t ask to skip an issue or choose a future one.
OK, that’s it. Thanks for reading and of course, if you have any questions, write us at [email protected]
Best Wishes,